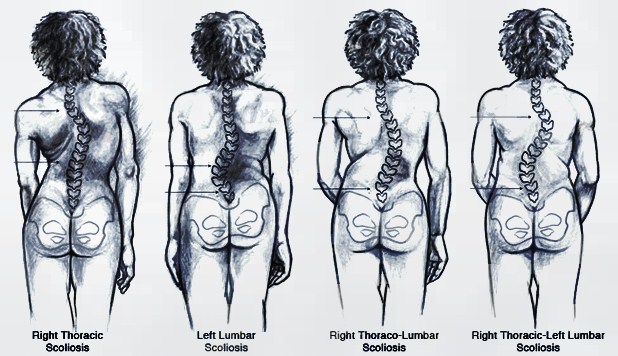 If you think that you or a loved one may be suffering from scoliosis, there are some scoliosis signs and symptoms to which you will want to pay particular attention. Recognizing and acting upon these earlier on can make a huge difference in living with the condition.

Sometimes, scoliosis can have subtle signs, such as mild curvature or misalignment of the body, but be without any obvious symptoms. Often enough, only slight aches or strain will be felt from minor cases of scoliosis. In these cases, stretching, over-the-counter pain relief medications, heating or other non-invasive methods may alleviate symptoms.

Sometimes the underlying scoliosis is not even recognized until a routine screening is undertaken, or until the condition progresses further. Indeed, mild scoliosis can go undetected for years, or even decades. When progression does occur, there may be signs and symptoms that are visible or strongly felt by the patient.

External Evidence of an Internal Issue

Some of the scoliosis symptoms you can actually see with your own eyes. These symptoms result as the spine pulls to one direction or another off of its normal S-curve formation. If scoliosis is forming, the symptoms you see may be caused by the change in the way the body positions due to the spine’s position changing.

Clothing that is the right size may fit differently. One pant leg may be consistently shorter than another. Fitted shirts may seem to twist on the body rather than hanging straight. Hems may not hang evenly on clothing.

In congenital scoliosis, acquired before birth, sometimes there will even be changes in skin color or discoloration. These patches, sometimes called “café au lait” patches, can show on the outside what abnormalities might be occurring on the inside.

Scoliosis Can Cause Changes in Body Alignment

In other cases, there are signs in the body itself that the spine is misaligned. One shoulder may appear to set above the opposite shoulder, as may one hip compared to the other. A person’s head may seem to sit off the center-line or tend to tilt to one side.

In more obvious cases, the line of the spine may be obviously crooked if seen from behind. The skin may be dimpled or different in an area of the spine, showing how the underlying muscles stretch unevenly over the contorted spine.

Due to involvement of the ribcage and shoulder blades, sometimes the ribs will seem to protrude. Alternately, the ribcage may seem uneven from one side to the other. One shoulder blade may seem to protrude further than another. When standing, a person may lean more towards one direction rather than standing perfectly straight. Also, when sitting, one might tend to sit with the hips tilted off to one side and never the other side. The waist may be uneven, and even the chest wall and breasts may be misaligned.

Often enough, scoliosis isn’t seen at all – but felt. The symptoms may be subtle, such as lower back pain after standing or even sitting for a while. The pain can range from a dull ache to stronger, shooting pain and muscle spasms, sometimes being misinterpreted as just being regular fatigue or muscular strain.

However, as time passes, the uneven strain placed on the back and spine, as well as all the other structures that depend on this foundation of the body, may result in arthritis. Arthritis, particularly osteoarthritis, occurs as wear and tear on joints including the vertebrae cause damage to those joints. The cartilage between the joints can inflame or even degrade. Bone spurs can occur, as well as inflammation around the irritated area. This causes pain which can be debilitating.

In the most severe cases of scoliosis, the ribs and spine may be so affected that they interfere with the function of the lungs and heart. Breathing may be impaired or even painful. Chronic damage to the lungs can even result in repeat cases of pneumonia.

Unfortunately, any great deviation of the spine can damage the underlying, delicate spinal cord.  The spinal cord is the line of communication between the brain and the functions of the rest of the body. If pinching or damage occurs to the spinal cord, any part of the body control at that spot or beneath it may be debilitated or lose function.

In extreme cases of scoliosis, bladder function, feeling in the lower limbs, bowel control and organ function may be affected. There may be a loss of feeling, numbness, tingling, or even a pins-and-needles feeling in the legs and feet. These symptoms, as well as pain, can be annoying and debilitating for the severely affected victim of scoliosis.

The symptoms of scoliosis can be exacerbated by activity. Of course, standing or sitting in one position for extended periods of time causes strain which results in pain. Lifting, bending, and any other type of strain – particularly when done without caution – can also cause an acute increase in pain or other symptoms. Any major change in symptoms should always be brought up with one’s physician.

Whether seen or unseen, felt or unnoticed, scoliosis has the potential to cause difficulty and, once diagnosed, patients with scoliosis and their physicians should always make a point to watch for any progression. Recognizing some of the signs and symptoms of scoliosis can help the patient to keep an eye on their condition and catch changes early for less pain and greater quality of life.