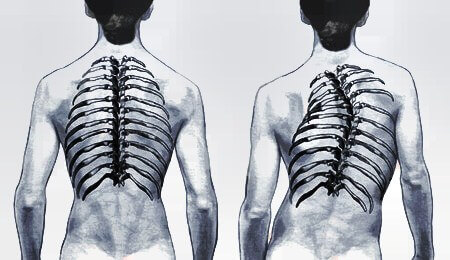 Scoliosis is a back condition that affects many people throughout both civilized and industrial nations, and those that are considered third world.

It is an abnormal formation in the spine; usually a curve that is different from the normal S-curve found in people, which is easily seen in a person’s posture when looking at them from the side.

Scoliosis causes the spine to curve sideways rather than front to back or top to bottom. In more medical terms, it is defined as any lateral alteration of the spine of more than 10 degrees.

This abnormal curvature of the spine can lead to unpleasant scoliosis pain, abnormal gait and other complications.

There are mild forms of scoliosis, which affect a person in a limited way, and other more extreme types, which can bring on serious pain and debilitation as part of the list of scoliosis symptoms.

There are different forms of this disease:

Idiopathic Scoliosis – Most often found in children. It usually shows up in pre-teen and teenage years, namely adolescents. It tends to be genetic, and girls are usually more likely to show symptoms than boys. Under this category, IS is often divided into further types:

Congenital Scoliosis – This refers to scoliosis that forms most often in utero – between the third and sixth week after conception. Since scoliosis pain is commonly an indicator of the disease in the former type, it is often diagnosed with commentary from the patient and x-rays, but since this type is formed while the baby is still in the mother’s womb, it may be necessary to take steps early if the disease is suspected.

Furthermore, when scoliosis of the spine occurs, it often affects the ribs as well. The same way that vertebrae may fuse together, so may the bones of the rib, causing a hemi-vertebrae or other malformations which can lead to thoracic insufficiency syndrome, which means the thoracic cavity cannot develop due to insufficient space. Obviously, this can lead to problems with correct breathing for patients who have congenital scoliosis, among the many other physical and mental tribulations they must endure.

Neuromuscular Scoliosis – This type of scoliosis is often caused as a secondary symptom of another disease. Diseases like spina bifida, muscular dystrophy or cerebral palsy can cause spinal weakness and deterioration, and eventually abnormal curvature. Spinal cord injuries that cause abnormalities on the spine are another form of neuromuscular scoliosis.

Patients who suffer from neuromuscular scoliosis have some of the same concerns as congenital or idiopathic scoliosis, but since this form is a secondary issue to another disease, it can be even more difficult for patients to cope.

In cerebral palsy, for example, not only are the bones of the spine and ribs affected, but the entire nervous system cannot function correctly, and there are often mental delays and cognitive functioning challenges.

In the case of spina bifida (split spine, a congenital birth malformation) neuromuscular scoliosis is only one issue to contend with, since there is not only an abnormal curvature of the vertebral column, but the spine may be missing entire segments of bone or parts of the spinal cord may protrude form the body since it does not form correctly.

Furthermore, even when neuromuscular scoliosis is caused due to spinal injury, there are often other considerations aside from curvature or fusing of spinal vertebrae.

As mentioned, scoliosis can be mild or acute — scoliosis symptoms vary depending on the type and severity.

Just some of the symptoms of this disease include:

There are many scoliosis exercises aimed specifically at those who suffer from abnormal curvature of the spine, in order to stretch the surrounding muscle and encourage a lessening of the deterioration of the spine. Sufferers can try simple stretching exercises or more intense forms of therapy.

People with symptoms so severe that they had to wear metal braces 24-hours a day, even while they slept, have found alternatives like taking a yoga class so beneficial that they gradually retrained their spines to curve normally.

When these non-invasive methods are unsuccessful at stopping the further deterioration of the spine and other scoliosis symptoms, then surgery may be a last-course treatment.

Many medical journals state that up to 40% of patients still have pain even after surgery, so other methods of management including physical therapy are ideal since many patients report still having to take pain medications in order to deal with their disease.

Postponing surgery, however, can make it less effective since there are normally larger curves in place that must be corrected. Often, hardware used for bracing in this case, fails.

Less invasive forms of surgery are being conducted using smaller incisions and less metal hardware, though, and when used in conjunction with alternative forms of scoliosis symptom reversal, can be quite successful.