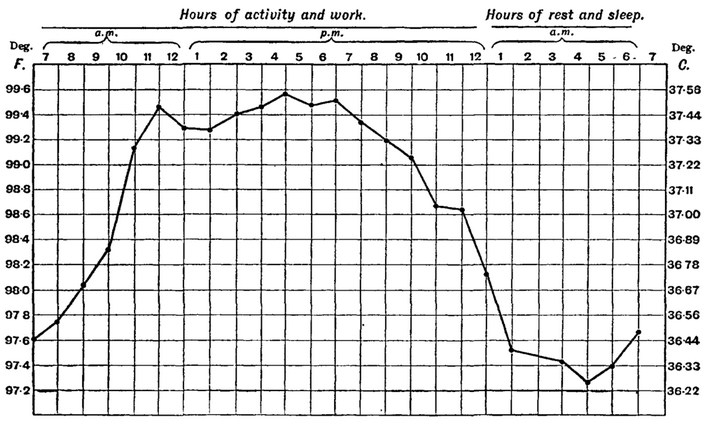 Normal body temperature in humans is 37o C and shows variations, depending on the activity, sleep-wake cycle, and due to hormonal effects. The temperature has a circadian rhythm, which shows the highest in the evening and lowest in the early morning. In infants the body temperature can increase, if there is a bout of crying. In reproductive women, during mid cycle, the basal body temperature rises by 0.5oC following ovulation, due to the progesterone effect. Hyperthyroidism raises the body temperature, while hypothyroidism lowers it. Pathologically, during fever, the body temperature is increased, due to the resetting of thermostat by cytokines and interleukins 1, 2, 6.
The body temperature is usually measured with the help of a clinical thermometer. In adults, oral temperature can be recorded and in infants, recording can be done from the axilla. Rectal temperature is also recorded, which reflects the core temperature. It is 0.5 to 1oC more than the oral temperature. The temperature recorded from the axilla is 0.5oC lower than oral temperature. Oral temperature recording will not give the normal value, if cold or hot drinks are taken prior to recording. The normal body temperature that is recorded, reflects the balance between the heat production and heat loss in the body. The sources of heat production come from the metabolism of food in the liver and skeletal muscle contraction. Heat is also gained, by radiation, conduction and convection, if the ambient temperature is higher than the body temperature. Normal heat production in the resting state is about 1600 cal/day in an adult. This is increased, when there is muscular exercise or physical activity. Heat loss from the body occurs in several ways. If the ambient temperature is lesser than the body temperature, heat is lost from the body by radiation, conduction and convection.
Radiation is caused by the electromagnetic waves radiating to the surrounding air and cold objects. Conduction is by molecular collision, where the heat is transferred to the cold objects to which the body is in contact with and also to the surrounding air. The air current facilitates greater transmission of heat in conduction. Convection refers to the movement of air, which removes heat from the surface of the body, thereby causing more heat dissipation.
The other mechanism for heat loss is by the formation of sweat. It is the vaporisation of sweat that removes heat from the body and not the sweat that is formed. Vaporization of water in the sweat dissipates heat and each g of water, when vaporises, can dissipate 0.54 kcal of heat. Air current and dry air influence the vaporization of sweat. If humidity is more, the vaporization of sweat is less and causes sultriness. Heat is also lost from the surface of the skin as insensible perspiration. The other routes for heat elimination are the expired air, urine and feces. The elimination of heat in the expired air is an important mechanism to regulate the body temperature in animals like dogs. Panting in these animals helps to remove the excess heat in the expired air.