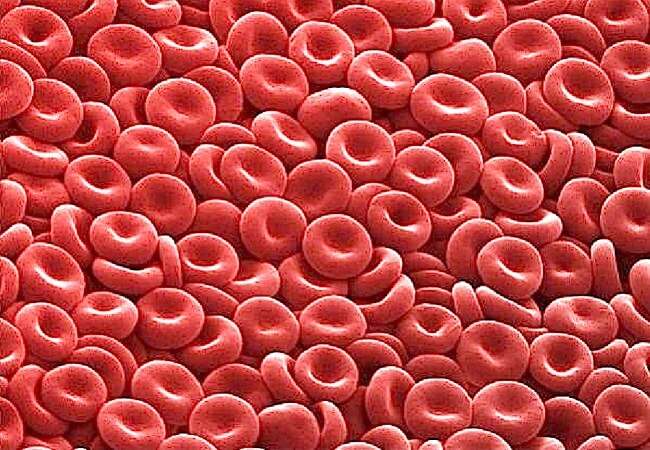 Erythrocytes are biconcave, non-nucleated and disc shaped, with cytoplasm containing a red colour pigment hemoglobin. The cells have a mean diameter 7.5 μ and thickness 2 μ.The thickness is less at the center, which is 1.0 μ. In venous blood, they are slightly larger by about 0.5 μ, due to the osmotic changes. The cell membrane has a bimolecular lipid structure and the lipoprotein complex on the membrane contains, A, B and Rh antigens. The cytoplasm has no mitochondria and hence no oxidative phosphorylation occurs in the red cell. There is anaerobic glycolysis leading to Embden Meyerhof pathway of glucose metabolism, which generates ATP and NADH.
There is also formation of 2,3 DPG. To a little extent, there is also pentose phosphate pathway for glucose oxidation. Red cells, even through nonnucleated, are considered as living cells, since they carry out the above described metabolic reactions. Red cell cytoplasm contains more potassium and also rich in carbonic anhydrase enzyme. The membrane has an active sodium pump mechanism to maintain a low level of its concentration inside the cell. This prevents any change in its size, due to osmotic changes.The average surface area of a red cell is 120 μ2 and the mean volume is 90 μ3. The biconcave shape of the cell gives a greater surface area/ volume ratio and this is advantageous to the cell to increase its volume without rupture, if there is an osmotic change. Another advantage is that, there is a maximum surface area available per unit mass of hemoglobin for gas transport.
The quantity of hemoglobin, in a single cell is about 33% of wet weight of the cell. Red cells perform important functions such as transport of respiratory gases, and acts as a buffer(Hb). Normal count of red cell in adult male ranges from 5 to 5.5 million per cubic millimeter of blood.
In females, it is slightly lower due to the low basal metabolism and the range is 4 to 4.5 million cells per cubic millimeter of blood. In the new born, the count is more than adults. It ranges from 6.5 to 7 million per cubic millimeter of blood. The volume of red cells in 100 ml of blood forms the hematocrit (Hct). Its value in males is 47% and in females it is 43%. Average life period of a red cell is 120 days and it can be determined, by tagging red cells to radio active isotopes P32 or Fe55 and reintroducing them into the circulation. The radio activity count is measured until 0 value. The number of days that takes to get 0 count gives the life period of red cell. The senile red cells are destroyed in the reticuloendothelial system (tissue macrophages) in spleen, liver and bone marrow.