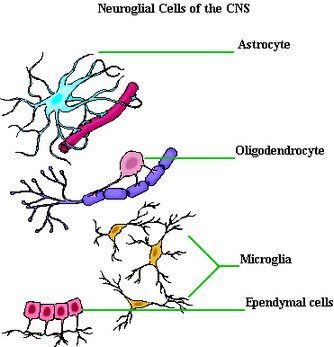 
In peripheral nervous system
Ependymal cell
These are single-layered cubical or columnar cells lining the cavities (ventricles and central canal) of central nervous system (brain and spinal cord). They represent the original cells lining the neural tube of embryonic life. The free surface of the cells present ultramicroscopic finger-like prolongations which are nonmotile in nature. These are known as stereocilia.
Functions:Astrocytes
These cells are so-called because they are star-shaped with radiating cytoplasmic processes. Astrocytes are of following two types.

Oligodendrocytes
These are smaller round or spherical cells with lesser number of processes. They are found in white matter of central nervous system where expanded end of their processes wrap around the length of nerve fibers. This wrapping (ensheathment) or insulation of nerve fibers is known as Myelination. The myelination prevent the nerve impulse to be dissociated to the surrounding tissue and thus facilitate the full conduction of impulse towards the destination.
Functions:
1. Oligodendrocytes primarily provide supportive functions around neurons of central nervous system.
2. They form myelin sheath around nerve fibers (processes of neurons) inside central nervous system.

Microglia
Microglia are so-called because they are smaller in size. The cells present finer tortuous processes. Microglia are identified by following three characters which are related to the letter ‘M’.
Function: Microglia, as already stated above, are phagocytic in nature to act as scavenger cells or macrophages of central nervous system.