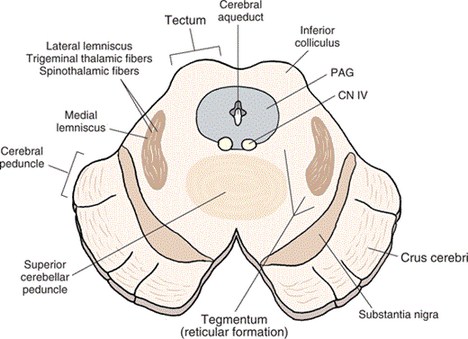 Central cavity of brainstem show different characteristics and names at different level. At lower end of medulla it is a narrow canal continuous below with central canal of spinal cord. At the level of pons and upper half of medulla oblongata, it becomes wide to form the cavity of 4th ventricle of brain. At the level of midbrain it is a narrow slit called aqueduct of Sylvius.
Fundamentally, neurons of basal plate are motor and those of alar plate are sensory in function. Throughout the whole length of developing brainstem, initially, many neurons of both basal as well as alar plate will form number of continuous columns of cells which are as follows:
In basal plate (from medial to lateral)

In alar plate: From medial to lateral in closed part of brainstem, i.e. midbrain and lower end of medulla oblongata and, from lateral to medial in open part, i.e. pons and upper part of medulla oblongata.Ultimately, neurons of all these columns will persist in some level and disappear in some level. So they will no longer be present in the form of continuous cell column althrough. These cell groups will form different motor and sensory nuclei of 3rd to 12th (last 10) cranial nerves.

Migration of neurons of alar lamina: Apart from formation of sensory (afferent) nuclei of cranial nerves, neurons of alar plate will migrate from its original position either ventrally or further dorsally to form some other named nuclei in different level of brainstem (described below). This nuclei, as migrated, will intermingle with the components (white matter) of marginal zone.
Derivatives of marginal zone: It is already understood that, marginal zone is composed of processes of nerve cells of mantle zone. These processes will form different groups of bundles of nerve fibers which are basically of following two types: