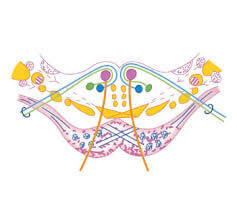 Gray matter: Some cranial nerve nuclei and nuclei of pontine part reticular formation. l Abducent nerve nucleus: It is the nucleus of somatic efferent group. Fibers of abducent (VIth cranial) nerve arising from this nucleus supply lateral rectus muscle of eyeball which is developed from preoccipital myotome of paraaxial mesoderm. This nucleus is situated deep to a paramedian bulge adjacent to posterior median sulcus. The bulge is called facial colliculus because the surface of abducent nucleus is winded by fibers of facial nerve.


Cochlear nucleus of vestibulocochlear nerve: It is exteroceptive type of special somatic afferent nucleus of cochlear component of vestibulocochlear nerve. It is made up of dorsal and ventral components lying dorsal and ventral to inferior cerebellar peduncle fibers at the level of pontomedullary junction.
Connections of cochlear nuclei: