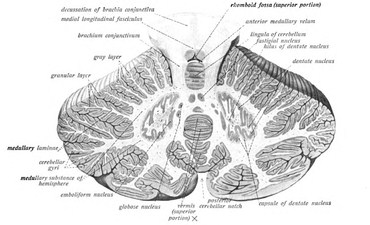 These are small but compact masses of gray matter embedded in central core of white matter. Axons of neurons of these nuclei, as already discussed,
leave out of cerebellum through either superior or inferior cerebellar peduncles as cerebellar efferents.
Cerebellar nuclei are four in number on either side of midline from vermis to cerebellum hemisphere. From lateral to medial the nuclei are:

Dentate Nucleus
Dentate nucleus is the most lateral and largest among the four nuclei of cerebellum. It is most prominent in higher animals, specially in human brain. Phylogenetically it is the latest in evolution and obviously related to neocerebellum. Dentate nucleus, on section, looks like a folded bag with its opening (concavity) facing medially. From the concave side emerge efferent fibers from the nucleus. Efferent fibers leave cerebellum through superior cerebellar peduncle.

Globose Nucleus
It is round in shape and sometimes may be more than one in number. Globose and emboliform nuclei are closely apposed to each other and interposed between dentate nucleus laterally and fastigial nucleus medially. That is why they together are named as nucleus interpositus. Nucleus interpositus is related to paleocerebellum.

Fastigial Nucleus
Fastigial nucleus is close to midline and thereby lies in the white core of vermis. It is ovoid or elliptical in outline and intermediate in size between dentatenucleus and nucleus interpositus. This nucleus is related to archicerebellum.