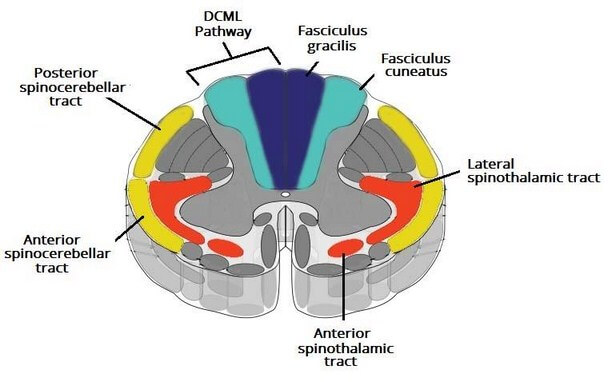 Ascending tract is a part of sensory pathway. Sensory pathway transmits sensory inputs (impulse) from peripheral receptors to concerned sensory areas of brain through chain of neurons. Mostly the chain is made up of three neurons called neurons of first, second and third orders.
First order neuron is called primary sensory neuron. Its cell body is situated in posterior root ganglion of spinal nerve. Peripheral process of this neuron carries sensory impulse from receptors or sensory end organs. Its central process or axon, entering the spinal cord, will have either of the follo-wing two fates:

Axons of tract neurons of spinal cord and axons of long primary sensory neuron, as compact bundles, carrying one specific type of sensation (exteroceptive or proprioceptive), ascend through different funiculi of spinal cord to form ascending tracts. Second order neurons are therefore tract neurons of spinal cord, or some nuclei above spinal cord, where long primary sensory neurons relay.
Third order neuron is present in the thalamus in the form of different nuclei receiving inputs for different sensations. Axons of third order of neurons finally send projection fibers to sensory areas of cerebral cortex.
At this stage, it is important to repeat that ascending tract and sensory pathways are not synonymous term. It is already understood that ascending tract is a part of sensory pathway. It is further important to note that, some of sensory pathway is made up of less than three neuronal chain, e.g. pathway for spinocerebellar tract. Again, some are composed of more than three orders of neurons, e.g. visual pathway. Classification of ascending tracts on functional basis:
A tract, as classified below, may carry either exteroceptive or proprioceptive sensation. Again one may transmit sensations of both these kinds.Before further study of ascending tracts, it is important to note following points.