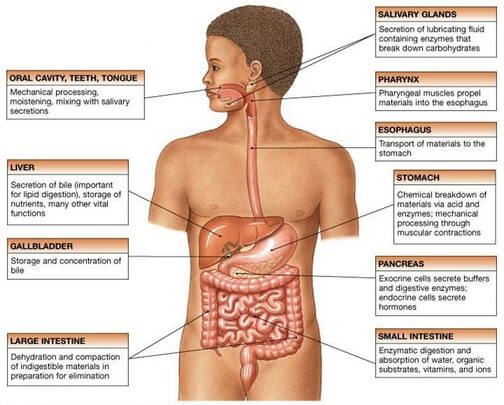 The digestive secretion in the mouth comes from salivary glands. There are many salivary glands present in the buccal cavity, but three pairs of glands are considered significant in their secretion of saliva. These glands are parotid, submaxillary (submandibular) and sublingual. These are exocrine glands, as the secretion is carried by a duct and poured into the mouth.
Each gland shows in common, secretory cells arranged in acini and duct cells, which continue from the lumen of the acini. In the acini, two types of secretory cells are found. One is serous, which secrete watery juice rich in the enzyme ptyalin and other is, mucous, which gives a thick viscous secretion rich in mucin. The parotid gland mainly consists of serous cells and the submaxillary gland has mixed cells (seromucus). The sublingual gland predominantly contains mucous cells. About 70% of salivary secretion comes from submaxillary gland, which has mixed cells.
Salivary glands are supplied by both the sympathetic and parasympathetic nerves. The sympathetic action gives vasoconstriction, which causes the secretion to be viscous and scanty. The parasympathetic effect causes vasodilatation and copious secretion of saliva. The parasympathetic fibers in the VIIth nerve, through the chorda tympani branch, supply the submaxillary and sublingual glands. The parotid gland receives parasympathetic supply from the IX cranial nerve. The secretion of saliva per day ranges from 1000 to 1500 ml. It has a pH 6.8 and ranges from 6.7 to 8. Saliva contains 99.5% water and 0.5% solids. The latter consists of inorganic and organic 310 Textbook of Physiology substances. Na+, K+, Cl–, HCO3 –, are the major inorganic constituents. The enzyme salivary-a amylase, mucin, lysozyme, IgA, blood group antigens are some of the organic substances present in the saliva. The saliva that is secreted in the lumen of the gland is isotonic, whereas the secretion in the mouth is hypotonic. It is due to the changes that take place in the lumen of the ducts.
The duct epithelial cells show active reabsorption of Na+ in exchange for K+. There is also exchange of Cl– with HCO3 –. Chloride is reabsorbed in exchange with bicarbonate secretion from the duct cells. Since the duct epithelial cells are impermeable to water, the removal of Na+ and Cl– ions makes the saliva hypotonic. Aldosterone, which is a mineralo corticoid, acts on the salivary duct cells and causes sodium reabsorption in exchange for K+ secretion. The concentrations of Na+ and K+ in saliva depend on the flow rates. At high flow rates, less time is allowed for transfer of ions and hence Na+ is more and K+ is less. Inspite of greater Na+ concentration in the saliva, it remains isotonic in the mouth at high flow rates.