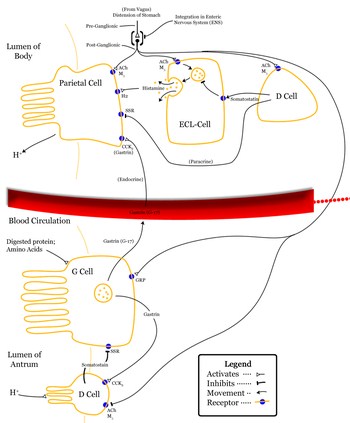 Presence of acid in the stomach has a negative feed back control, which inhibits gastrin secretion. Blood borne substances like secretin, GIP (gastric inhibitory peptide), VIP, glucagon and calcitonin inhibit gastrin secretion.It has many forms, similar to gastrin, ie, CCK 8, CCK 12. Its half life in the circulation is 5 minutes. CCK is cholecystokinin, which causes the gallbladder contraction and release of bile. The same hormone acts on the acinar cells of the exocrine pancreas and produces pancreatic secretion rich in enzymes. Hence, CCK is also called pancreozymin. Since both are one and the same, it is commonly referred as CCK- pancreozymin. CCK is secreted from the mucosa of the upper part of small intestine, from nerve endings in distal ileum, colon and neurons in brain.
Actions of gastrin: