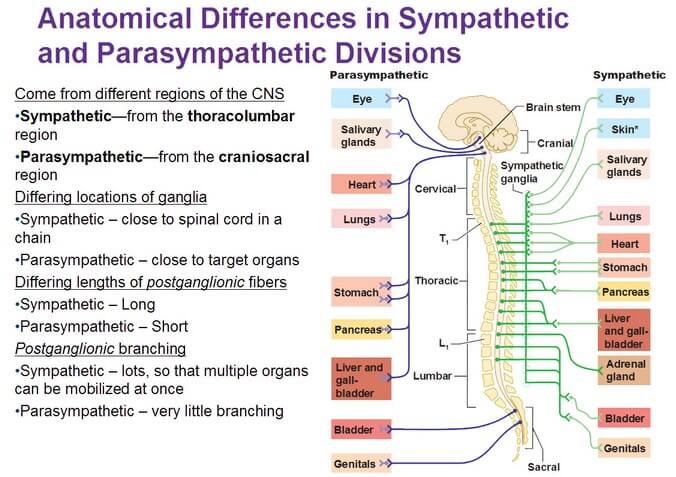 For maintenance of internal environment (homeostasis), though one reciprocates other, sympathetic and parasympathetic parts of autonomic nervous system differ from each other as per following criteria:

Sympathetic ganglia interconnected by vertically oriented chain of fibers called sympathetic chain (sympathetic trunk) are situated close to central nervous system (spinal cord) being paravertebral in position. The sympathetic chain is formed because fibers from each ganglia ascend or descend for one or two segments up and down before proceeding toward destination. As sympathetic ganglia are close to central neuraxis, postganglionic fibers are longer to produce more generalized activities on effector organ.
Parasympathetic ganglia are very close to the target organ, in the wall of viscera. So postganglionic fibers are shorter to produce more localized action. Physiological difference Both sympathetic and parasympathetic systems work in subconscious level, but they come into action in different environment.
Sympathetic system gets activated during emergency, stress or anger. This can be explained with a classical example. A man walks around a park in a pleasant afternoon. Suddenly, he is chased by a rabied street dog. The man runs away very fast to save himself from the attack of the dog when his sympathetic system becomes more active with the following changes in body.
Parasympathetic system is concerned with conservation and storage of energy. For example, in a comfortable holiday, when there is no stress or anxiety for classes or examinations, a student takes a full meal and goes for sleep in bed, his arasympathetic part of autonomic nervous system gets activated with following changes in the body.