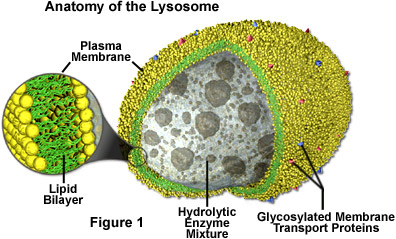 They are the vesicles containing hydrolytic enzymes. They are formed from endoplasmic reticulum and Golgi apparatus. The main function of lysosomes is in the digestion of the engulfed material. The substances that are engulfed into the cell by pinocytosis or phagocytosis, fuse with the lysosomes and form the digestive vacuole. The lysosomes which are not attached to the phagocytic vacuole are known as primary lysosomes and those which are attached are called secondary lysosomes. The acid hydrolases in lysosomes digest the engulfed material and the indigestible ones are in the residual body. It is released from the cell by exocytosis. The lysosomes also can digest the breakdown products of cell’s own organelles. In certain pathological conditions such as gout, rheumatoid arthritis, the release of lysosomal enzymes is considered to be the causative factor in the pathogenesis of the disease.
Lysosomal storage diseases such as, Gaucher’s disease, Fabry disease and Tay- Sachs disease are due to congenital absence of lysosomal enzymes. The absence of β-galactocerbrosidase causes Gaucher disease while lack of α-galactocerebrosidase results in Fabry’s disease.