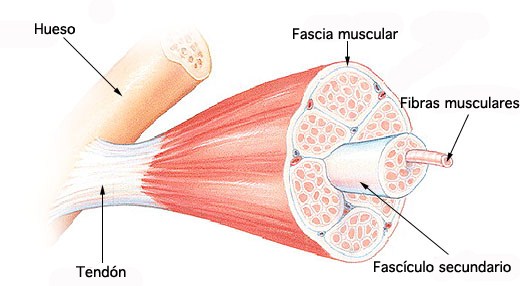 the skeleton enables us to do voluntary movements. Skeletal muscle is covered by a connective tissue called epimysium. The muscle contains a number of fascicles, which are covered by a connective tissue perimysium.
Each fascicle (bundle) contains a large number of muscle fibers and they are covered by endomysium. Each muscle fiber can be called as a muscle cell and the membrane lining it is called sarcolemma. The muscle fiber is a multinucleated cell and the nuclei are found beneath the sarcolemma. The sarcoplasm contains cell organelles such as Golgi apparatus, mitochondria, myoglobin, sarcoplasmic reticulum, enzymes, lipids, proteins and glycogen, etc.
The muscle fiber consists of a number of myofibrils, which contain the contractile proteins. Each myofibril is further sub-divided into sarcomeres. Sarcomere is the structural and unctional unit of the muscle, which extends between two adjacent Z lines. A sarcomere includes a complete A band (darker zone) and one half of I band (lighter zone) on either side of A band. The A band contains the thick myosin filaments, whereas the I band consists of the thin filaments, which include actin, tropomyosin and troponin. The lighter H band in the center of A band could be seen when the muscle is relaxed. A transverse section of A band will show that each myosin filament is surrounded by six actin filaments arranged in a hexagonal fashion. In resting state, sarcomere width is 2.2 μ and when it shortens is reduced to 1.6 μ. Decrease in the width of sarcomere, I band and H zone occurs. The length of the contractile filaments namely actin and myosin and width of A band shows no change during muscle contraction.Contractile proteins are actin and myosin.
Myosin is a thick filament present in the A band and each thick filament contain 200 to 300 myosin molecules. There are two heads for myosin molecule, which are formed by 2 heavy chains and 4 light chains. Myosin molecules are arranged symmetrically on either side of the center of sarcomere. The orientation of myosin molecule in one half of sarcomere is opposite to the orientation in the other half of sarcomere. The heads project from the molecule at an angle to form cross bridges with actin.
Actin is present in the thin filament. Each filament contains 300 to 400 actin molecules. The structure shows that it is made of globular proteins arranged in a double helical fashion. The actin is connected to the muscle membrane proteins α and β dystroglycans through dystrophin molecules. The dystroglycans are further extended to the extracellular matrix and as well as to the sarcolemma glycoproteins. These connections give strength to the muscle.

Jump on our starting guide for what beard growth products really work for men.
Kyphoplasty