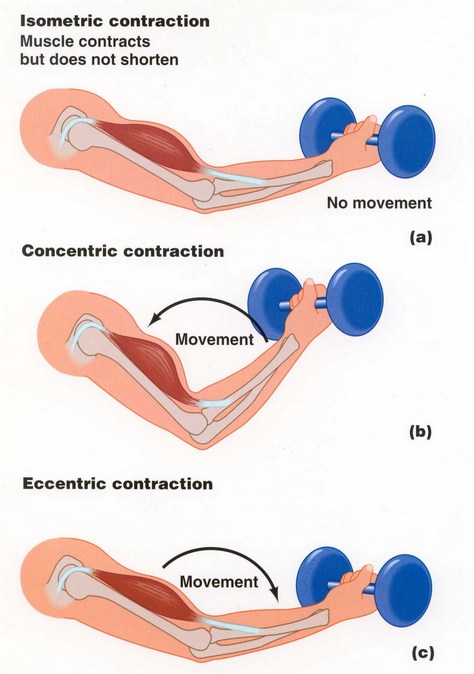 There are two types of muscle contractions, namely isotonic and isometric.
In isotonic contraction, the muscle is allowed to shorten, but the tension in the muscle remains constant. Force developed from contractile elements is transmitted to the series elastic component (SEC), which comprises, tendon and other elastic tissues. The stretching of SEC transmits force to the skeleton for movement. In isotonic contraction, the muscle lifts a load and there is external work done. The load acts on the muscle during shortening and hence it is called afterload. All isotonic contractions occur in afterloaded conditions only. The lifting of load by the muscle stretches series elastic component and the force developed will be equal to the afterload. As the muscle shortens, its length varies, but the length of SEC remains constant.
In isometric contraction type the tension developed in muscle is variable, but the length of muscle remains constant. This type of contraction is seen in postural muscles, which maintain muscle tone. Experimentally, isometric contraction can be recorded by attaching a force transducer to one end of the muscle and the other end is fixed firmly.The recording will show the force developed in the muscle.The muscle is not allowed to shorten, due to the fact, that the SEC stretches simultaneously, as the muscle develops tension.This prevents the muscle shortening. The muscle which is attached to the skeleton shows sarcomere width as 2.2 μ. This length is the resting length and the tension developed for this length is maximum, due to stretching. At this length of sarcomere, there are maximum number of cross bridges, hence there is maximum tension. This is called resting tension. If the length of muscle is shorter than the resting length, the thin filaments begin to overlap and the number of cross bridges become less. If the length of muscle is longer than the resting length, only a few cross bridges will form and the tension declines.
The relationship between length and tension can be studied in an isometric contraction. Experimentally, it is possible to measure the tension developed at various lengths of muscle. We can observe that when the muscle is allowed to shorten isometrically, the tension developed is over and above the resting tension and is called total tension. The difference between total tension and resting tension gives active tension.
In experimental setup, where isotonic type of contractions are recorded, it can be observed that the sarcomere length of muscle is less than 2.2 μ when isolated from skeleton. Stretching by load (preload) will cause greater tension and gives greater force of contraction (Starling’s phenomenon). If stretching of sarcomere takes place beyond 2.2 μ, the force developed is decreased and greater force of contraction can not occur. It should be remembered that the muscle which is attached to the skeleton in our body, has a sarcomere length 2.2 μ (optimium length) and the tension developed is maximum.
There is an inverse relationship between force and velocity. As the load on the muscle is increased, the force (tension) developed is decreased and consequently, the velocity of shortening becomes less. The velocity of shortening is maximum when after load on the muscle is nil. That is, at the resting length, the velocity of muscle shortening is at its best when there is no load. It is our common experience that whenever we lift a light weight object, it is done faster, while it is not so, when we try to lift a heavy weight object. It is only in isotonic type of contraction, force velocity relationship can be observed.