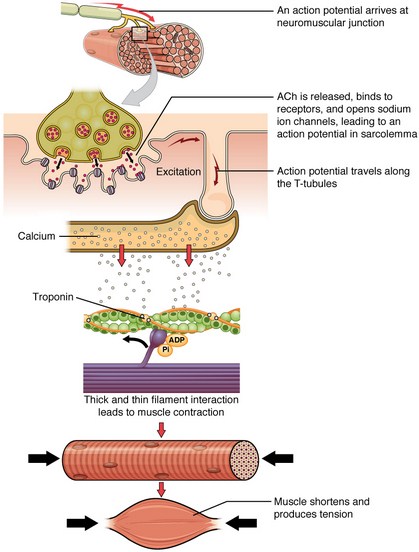 Skeletal muscle contraction is preceded by the excitation of the muscle by the nerve fiber. The events that occur from the point of excitation of the muscle to its contraction is called excitationcontraction coupling.
Recent concepts about the molecular basis of muscle contraction, is explained on the basis of cross bridge mechanism, which also includes sliding filament process.
The arrival of action potential at the triad, releases Ca++ from cisternae, which increases its concentration in the cytosol. Calcium is the ion which is responsible for initiating the muscle contraction. Calcium from cytosol is attached to troponin C, which brings about conformational changes in troponin molecule, leading to sinking of tropomyosin in the groove of actin. This uncovers the binding sites in actin.
Myosin head is tilted at an angle towards the actin. There is a cleft in the head in which ATP fits in. The myosin head has ATPase, which causes hydrolysis of ATP and gives ADP, inorganic phosphate and energy. The hydrolysis of ATP in the head of myosin, leads to its distortion and straightens out towards actin (90o orientation) to get attached to it. This process completes the cross bridge formation, which is followed by sliding filament mechanism. The head of myosin produces a swiveling movement, which is also called power stroke mechanism. The movement occurs due to the result of change in the orientation of myosin head. That is, from 90o orientation, it is changed. Structure of sarcoplasmic reticulum and triad in a skeletal muscle to 45o and then the movement is produced. This change in orientation of myosin head is brought about by the release of products of hydrolysis of ATP namely ADP, and Pi.The thin filament moves towards the center of sarcomere by the power stroke movement. It is believed that each power stroke produces shortening of muscle by 1%. In order to achieve complete contraction of muscle, the head of myosin is attached to a new binding site in actin, and repeates power stroke movement. The attachment, power stroke and detachment are repeated over and again, until final shortening is produced. Myosin,after the release of the products of ATP hydrolysis, shows less affinity to actin and it is ready to accept a new ATP. The attachment of ATP to myosin, causes detachment of myosin from actin, leading to relaxation.
Relaxation of muscle depends on the active pumping of Ca++ back into the terminal cisternae. The receptor which opens up Ca++ channels for uptake in the cisternae of the sarcoplasmic reticulum is voltage gated and known as Ryanodine receptors. The enzyme that is involved in the active transport is Ca++-Mg++ ATPase. The Ca++ pump into the cisternae, results in the removal of Ca++ from troponin C. This causes conformational changes in troponin molecule, which makes tropomyosin to be lifted and rest in the groove of actin. These changes will cover the binding sites in actin. The interaction between actin and myosin gets inhibited by troponin I,resulting in muscle relaxation.