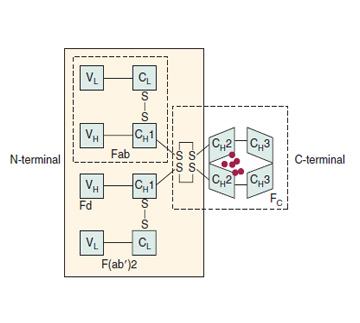 The antibodies (immunoglobulins) secreted by activated B cells are glycoproteins composed of polypeptide (82% to 96%) and carbohydrate (4% to 18%). Immunoglobulin molecules are composed of two identical 50-kDa heavy chains and two identical 25-kDa κ or λ light chains. The amino terminal portions of the heavy and light chains vary in amino acid sequence from one antibody molecule to another. These variable portions are designated VH and Vκ or Vλ, respectively. The juxtaposition of one VH segment and one Vκ or Vλ segment creates the antigen-binding portion of the immunoglobulin molecule, and each immunoglobulin molecule has two identical antigen-binding sites. The carboxyl terminal portions of the heavy and light chains are constant in each subclass of antibody. The heavy-chain constant regions pair to form the Fc domain of the molecule that is responsible for most of the effector functions of the immunoglobulin molecule, including binding to Fc receptors and activating complement.
The isotype of a heavy or light chain is defined by the constant region antigenic determinants, which in turn are defined by the particular constant region gene of that isotype. All isotypes are present in a healthy person. Because there are

Immunoglobulin G
Immunoglobulin G (IgG) constitutes approximately 75% of the total serum immunoglobulins and consists of four subclasses: IgG1, IgG2, IgG3, and IgG4. IgG is a monomer with a molecular weight of 150,000 Da. IgG1, IgG3, and, to a lesser extent, IgG2 can bind and fix complement. Specific Fc receptors for IgG are present on monocytes, macrophages, and neutrophils. IgG is usually bound to the Fc receptor before binding with antigen, and IgG functions as an opsonin that facilitates phagocytosis. The Fc receptors for IgG include FcγRI on monocytes and macrophages; FcγRII on most hematopoietic cells, except erythrocytes; and FcγRIII on NK cells, eosinophils, neutrophils, and macrophages. In general, the IgG antibody response to soluble protein antigens involves the IgG1 and IgG3 subclasses, whereas polysaccharide antigens elicit primarily IgG2 antibodies. IgG is the immunoglobulin primarily involved in secondary or recall immune responses and is the only immunoglobulin that can cross the placenta and protect the neonate. IgG can fix complement, which leads to neutralization, opsonization, bacteriolysis, agglutination, and hemolysis.
Immunoglobulin M
Immunoglobulin M (IgM) constitutes approximately 10% of serum immunoglobulins. It normally exists as a pentamer of five IgM subunits linked by disulfide bonds and J chains with a molecular weight of 900,000 Da. Along with IgD, it is the major immunoglobulin expressed on the surface of B cells. Membrane IgM functions as the earliest antigen receptor on B cells. Antigen binding results in B-cell activation and differentiation, which leads to pentameric IgM secretion. IgM predominates in the early humoral response, and levels then decline rapidly; the IgM is replaced by IgG of the same specificity. IgM is the most efficient complement-fixing antibody, a feature that increases its array of biologic activities, as with IgG.

Immunoglobulin A
Immunoglobulin A (IgA) constitutes 15% of the total serum immunoglobulins and exists in both monomeric and polymeric forms (the IgA dimer is a single J chain joined to two IgA monomeric subunits). Each immunoglobulin molecule has a molecular weight of 160,000 Da. Humans produce more IgA than any other immunoglobulin class, and the major role of this molecule is mucosal immunity. Monomeric IgA is synthesized by plasma cells located in the interstitial spaces of exocrine glands. These monomers combine with the J chain, which is also synthesized by IgA plasma cells, to form IgA2-J dimers. These dimers are too large to cross the tight junctions of the exocrine gland epithelium, and they are transported across the epithelium by an active secretory component–dependent mechanism.
130 During transport, IgA dimer covalently links to the secretory component by a disulfide bond. The newly formed complex of IgA dimer and secretory component, referred to as secretory IgA, is subsequently released into exocrine secretions by exocytosis. Secretory IgA appears to be derived from locally produced IgA, not intravascular IgA. IgA is the predominant immunoglobul