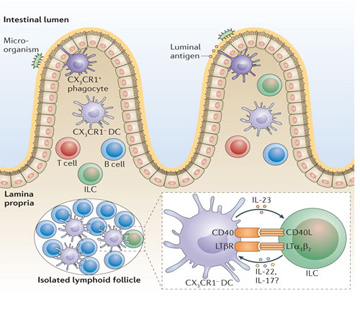 Tonsils
Three lymphoid structures surround the entrance to the throat: the adenoids, the palatine tonsils, and the lingual tonsils. These structures reach full development in childhood and begin to involute around puberty. The palatine tonsils are surrounded by a poorly organized capsule, except at the pharyngeal surface, which is covered with stratified squamous epithelium. Trabeculae extend from the capsule and divide the tonsils into lobules. Blood vessels and nerves enter through the capsule and extend within the trabeculae. The tonsillar surface is covered by pits that open into crypts that branch down within the tissue of the tonsil, maximizing the surface area exposed to the pharynx.
Each lobule contains numerous lymphoid follicles with germinal centers that contain mostly B cells. The lymphoid tissue that surrounds the follicles contains T cells, macrophages, dendritic cells, and B cells. These structures are strategically located at sites of entry of airborne particles through the nose (adenoids) and at sites of food particle entry (tonsils). The structures filter unwanted organisms and antigens and function as a mucosal immune barrier.

Peyer Patches and Lymphoid Follicles
Peyer patches are aggregates of lymphoid follicles within the mucosa of the jejunum and ileum, and most are in the terminal ileum. The full development of this component of the mucosal immune system, including the formation of follicles that contain germinal centers, occurs several weeks after birth; their number increases until puberty and then decreases. Lymphoid follicles, another component of the mucosal immune system with structures similar to follicles of a Peyer patch, are scattered throughout the mucosa of the gastrointestinal, respiratory, and genitourinary tracts. These lymphoid organs facilitate antigen presentation from the intestinal lumen to T and B cells.
Intraepithelial Lymphocytes and Lamina Propria. Intraepithelial lymphocytes are found at the basal surface of the epithelium and are interdigitated with epithelial cells. Most are T cells (CD8+ or CD4− and CD8−), and although most express αβ-TCR, some express γδ-TCR. The function of intraepithelial lymphocytes is not understood, but studies have shown their capacity to generate cytotoxic activity. The lamina propria, located beneath the epithelium, is populated by various groups of cells. One of the key functions of this tissue is the secretion of IgA antibody from the many IgA plasma cells into the lumen. The lamina propria also contains many CD4+/CD8+ T lymphocytes, in a ratio of about 2 : 1, and other effector cells, including IgG B cells, macrophages, dendritic cells, eosinophils, mast cells, and neutrophils.