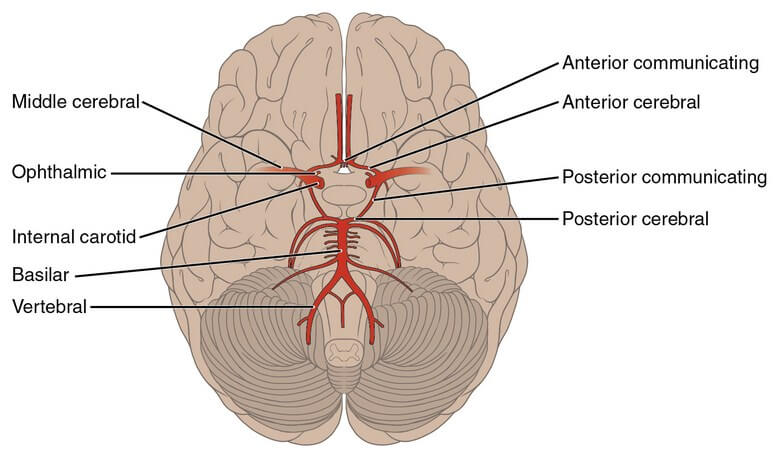 Brain is richly supplied by arteries. Brain is encased inside cranial cavity and covered by meninges. Source of the arteries are from outside the cranium so these arteries will have to enter the cranium. Entering the cranium the arteries and their main branches pierce dura mater and then arachnoid mater and are initially placed in subarachnoid space.
Final sets of branches penetrate brain tissue in
the form of two groups which are:

Carotid arterial system
Carotid arterial system is formed by intracranial portion of internal carotid artery and its branches. Internal carotid artery enters cranial cavity through carotid canal at the base of skull. Entering inside cranium it first lies in middle cranial fossa where it follows the following course The artery runs forwards along carotid sulcus in relation to inferomedial wall of cavernous sinus. Medial to anterior clinoid process it turns upwards. Here it pierces dura mater and then arachnoid mater to reach the plane of subarachnoid space. Internal carotid artery finally turns upwards and backwards lateral to optic chiasma below anterior perforated substance where it divides into its two terminal branches — Anterior and middle cerebral arteries.