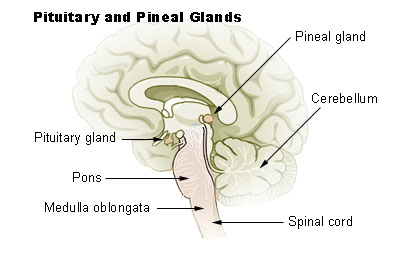 Evolution
In some classes of fishes and amphibian, this structure used to represent dorsal third eye. In higher animals and in the past in case of human, this organ was considered as vestigial organ. That is why it is used to be termed more commonly as pineal body.

Gross anatomy
Pineal gland is a small, reddish gray, sessile, conical organ, lying posterosuperior to main thalamic mass and it is lodged in a small depression between two superior colliculi. Above it is related to splenium of corpus callosum. Anteroposteriorly it measure 8 mm with the base directed forwards. Base of the gland is pedunculated. Peduncle of pineal gland (pineal stalk) is split up to form proximal (superior) and distal (inferior) laminae. In between two laminae, a smallconical outpouching of third ventricle of brain forms its pineal recess. Both the laminae of pineal stalk present transversely running fibers forming commissures. Fibers passing through upper lamina form Habenular commissure and fibers through lower lamina form posterior commissure. Some fibers invading the gland are called aberrant commissure which of course, do not terminate in cells of pineal gland. Reader is suggested to consult the chapter of white matter of Brain for further details about the commissures.

Structure
Pineal gland is classically known as neuroendocrine gland. Pia mater from inferior layer of tela choroidea of third ventricle forms an envelope of the gland. From this pial capsule, number of septae enter inside the gland to divide it into number of lobules. The septae also carry blood vessels and thin unmyelinated sympathetic nerve fibers arising from superior cervical ganglion.

Blood vessels
The gland is richly supplied by arteries which are branches of medial division of posterior choroidal branch of posterior cerebral arteries. Capillaries end in numerous pineal veins which finally come out to drain into internal cerebral vein and/or great cerebral vein of Galen.

Functions
Number of indoleamine and polypeptide hormones, including melatonin are secreted by pinealocytes. These hormones exert widespread regulatory effect on many endocrine glands of body, e.g.